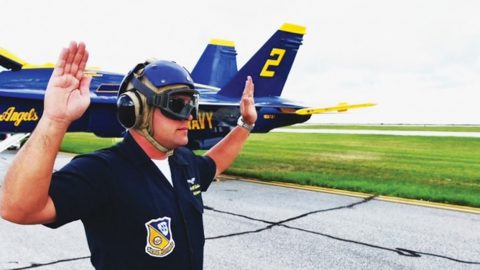 Really bad news for Cmdr. Ryan Bernacchi, as we can all feel for him and at some point have been there before. What he went through is never fun.

The Blue Angels rarely cancel their shows. Rain or shine, these guys perform more than 70 shows a year in 34 locations around the United States. They are, without a lack of better words, beasts of the sky. They never fail to bring their “A” game to every show (they kinda have to), but last weekend, things were simply out of their control.

Scheduled to fly in Sacramento, California, the Blues flew their Friday show without a hitch. That night however, they ordered some room service.

According to the Sacramento Bee, the following day was green lit for most of the day. The team was good and getting ready for yet another great show, but the squadron’s commanding officer started showing signs of sickness.

Evaluated by the squad’s flight surgeon, Cmdr. Bernacchi was grounded as he showed symptoms of food poisoning. For obvious safety reasons, the show did not go on.

We’ve  all been there, so you can imagine that you can’t do much in that state. Especially when your work includes consistently pulling 7Gs while trying to talk to your squadron.