The Time When N. Korea Hosted Its First Ever Military Airshow 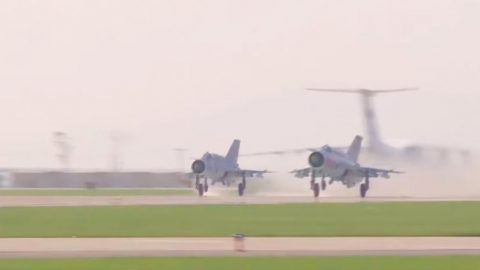 There You Have It Folks.

It’s no secret that tensions are high between North Korea and the United States, if not the rest of the world. With Kim Jong Un frequently testing ballistic missiles and allegedly getting closer to getting a nuke, you can’t be surprised. For this reason the U.S. has been training with South Korean forces for the sake of security. Also, B-52s and B-1s have been flying around the border as a form of deterrence. In the end it’s all games and flexing muscles, but it’s necessary.

As a “comeback” some might say, North Korea just held its first ever military air show. The purpose of course was to show their military might and attract more tourists so they could come witness it. Not sure if that’ll work, but we got our hands on some of that footage. You can judge for yourself.

Not surprisingly, the airshow featured lots of Russian equipment. What is odd however, is seeing Hughes 500Es as part of their show. Definitely not sold or gifted by the United States at any point in time, there’s major speculation that they’ve been illegally supplied to them by another country. Makes sense.

Now, we know you’ve been waiting for this for years, so check out this video. Some of you might get a good laugh.