During The Ukrainian Crisis, Dangerous Flybys Like This Were A Norm 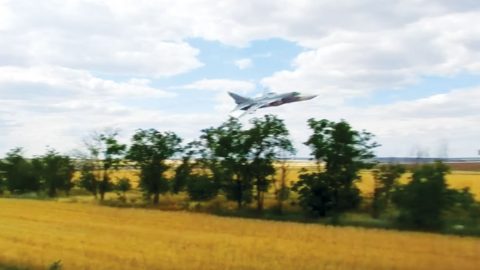 We’re not a political site (for the most part), so we’ll just give you the context of this video so you get the gravity of the situation. We love aviation and military planes, but getting down and dirty into the facts just gets messy and stirs unnecessary dialogue.

Back in 2013, Ukraine’s president Viktor Yanukovych declined being involved in a sanction with the European Union resulting in his ousting. This split the country in two as protests ensued and a revolution erupted. That was the same time that Russia got involved and controversially annexed Crimea in 2014. There was much fighting at the time and to this day relations are incredibly tense between the two countries.

Now imagine yourself being a regular person in Ukraine at the time. You’re driving or walking along the road and your ears pick up a distant roar. Within mere seconds, that roar turns into a scream while an Su-24 buzzes right over the trees you’re next to. That’s a scary sight if you don’t know what’s going on.

When we were browsing the web looking for flybys, there are literally dozens of videos like these. Since that part of the world uses dash cams quite heavily, there are a ton of videos of people driving in an urban setting when all of the sudden their car shakes as a jet flies right over them.