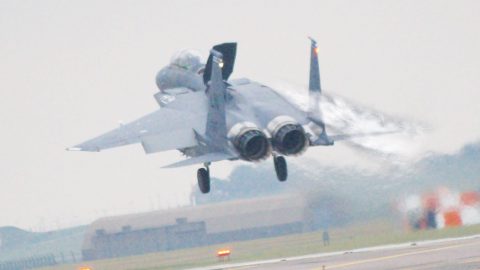 This Is One Of The Best Aviation Stories Ever.

You know how when you hit your toe on the edge of your bed (sorry for the visual) or get a paper cut and you don’t see the blood right away and it doesn’t hurt until you see it? Then when you do all hell breaks loose and you topple over. This is story is sort of like that except it involves a pretty badass plane. Now this story is ages old. It happened on May 1st, 1985 to be exact. Although some of you might know it, there are many of you that don’t and it’s definitely worth having in your arsenal of knowledge. Once you hear the story in this video and someone tells you there’s no way a plane can land with one wing, well, you whip this thing out and stump them. This footage is pulled straight from the History Channel and tells the story of an Israeli pilot who had a really bad day training. We’re not going to give the whole story away in writing here as the pilot tells it better himself, but there is one funny part to this story. Yes, funny. The crew didn’t know exactly to what extent the Eagle was damaged. After doing all he did to land it safely and then seeing the damage, he said if he knew how bad it was he would have punched out without second thought. It’s just that the spray of fuel and smoke blocked his vision and he couldn’t really see he had no wing.