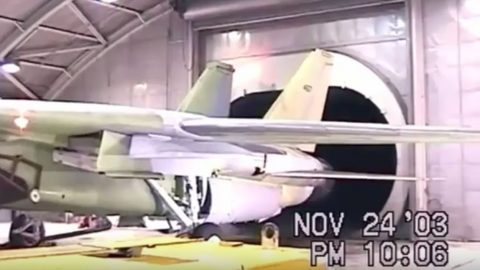 Don’t You Miss That Cat?

Before any aircraft engine is released to be used in the field, it has to go through some rigorous testing to make sure it’s been built right. That’s what you’ll be seeing in this video.

As you can imagine, this video is a bit old, as these fighters were retired in 2006. The video is dated November 24th, 2003 (remember VHS use to do that), so this was probably one of the last F-14s to roll out.

WARNING: Keep your volume low and adjust from there. The microphone couldn’t handle all the frequencies of what was happening. Wouldn’t want you folks to go deaf!

The clip is not expertly filmed by any means, but it does give you a rare look at engine testing. The forces here are tremendous and it boggles one’s mind that just tying down the plane keeps it in place without taking off with the whole building.

We know, it’s all done by Air Force professionals but still, impressive if you’re just a civvy.