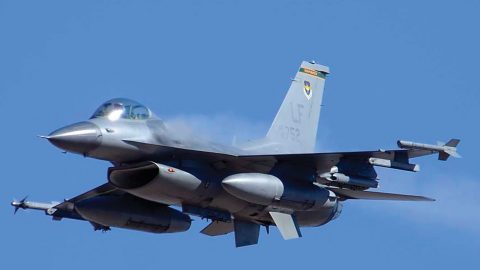 Never Heard That Before.

This footage comes to us from a Youtube uploader by the name of Musemania3. It was uploaded sometime at the end of 2014, and we’re happy to say it has decent sound. As you can imagine, we go through hundreds of Youtube videos a week, and see some horrid stuff. From shaky footage to downright atrocious audio, some videos should have never been uploaded. This isn’t the case here however.

We all know about the infamous “brrrrt.” Yup, the A-10 Warthog’s GAU-8 cannon makes that sound. Both the plane and the gun are known around the world, as that combination is hailed as the most successful CAS platform ever designed. There are however, other planes which perform that role as well (although can’t be as good of course.)

The F-16 Fighting Falcon is one such plane. Like we said, it’s not as effective as the A-10 as the rounds are not as big nor does it have even near the same capacity, but when needed, you’ll be glad that it’s there.

Equipped with a 20mm M61A1 Vulcan Gatling Cannon which carries 511, this thing can make some holes in the enemy.

In this video, you’ll hear exactly what it sounds like though. It’s not a “brrrt.” It literally sounds like a giant zipper. It might not sound as intimidating, but we’re sure the enemy would start running at the sound of it anyway.