Russian Pilot Does The Scariest Helicopter Wheelie To Date 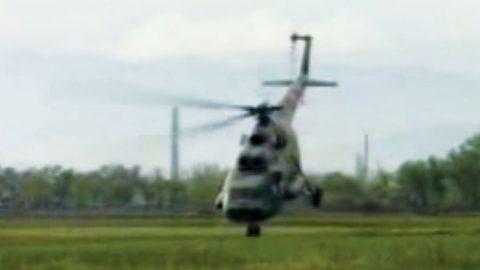 Not Safe, But Incredible To Watch.

We’ve been doing this for quite some time now, and it seems that some of the most dangerous, yet the most entertaining videos, are always of Russian aircraft and pilots. Sure, we have some incredible flybys of our F-18s and F-16s and so on, but the truly crazy stuff always happens in Russia.

In the past we’ve shown you the helicopter that randomly takes over a highway and passes everyone. Then there was the MiG that had its jet wash bend the tops of trees while people were waiting for the bus (yup, look for that on our site) as well as some other crazy things.

The helicopter in this video is an Mi-8T, a transport helicopter (sometimes armed as a gunship) developed by the Soviet Union in 1961.

Now, we don’t condone this Maverick type behavior. They are extremely entertaining to watch, but safety should always be first. It’s no wonder that when there’s a fighter jet or military aircraft crash it’s typically not marked with U.S. tags. The FAA, as well as military authorities, take this stuff pretty seriously, so pilots here are kept in check.

It doesn’t mean, however, that we can’t peruse the internet and show you…let’s say…a Russian helicopter pretending to be the world’s most expensive lawn mower.