In Russia, Hitting A Jump With A Tank While Firing Is Apparently A Thing 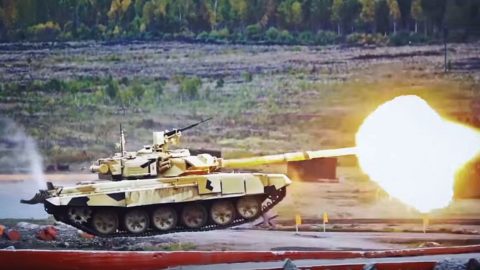 Not to sound too stereotypical, but Russians have always come up with some crazy $#*!. We’ve seen videos of jets buzzing apartment complexes and helicopters passing motorists on the freeway. That’s not to say that you don’t find some of the weirdest stuff from the U.S., but when it comes to the military, everything is pretty tidy and closed under the lid.

The tank you’ll be seeing here is the Russian T-90. It was in service since 1993 and is their third-generation battle tank.

Here, we found a tank firing its main gun. That in itself would be pretty cool to watch, but not according to them. Why don’t we build a jump and make the tank take it and THEN fire the gun while airborne? Well, that’s exactly what they did.

Since 2013, they’ve been hosting this event which tests the training of tank crews from 13 different countries. Testing anything from firing from a distance to this here “jump fire,” this is a pretty neat event to witness.