F-22 Pilot Pulls Up Hard Only To Slide Down, Tail First, Down In This Eye Boggling Stunt 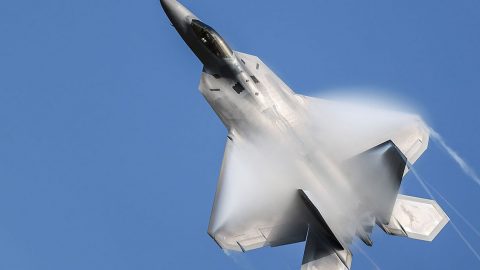 Our friend (if we can call him that) bobsurgranny from YouTube has reached out to us again and gave us a pretty sweet video of the F-22 Raptor doing mind boggling things. We say that because for the most part, not many military aircraft can pull off what Raptor pilots can.

Due to their thrust vectoring, this aircraft can turn on a dime as well as stall on a moments notice and regain lift in seconds. Sure, this technology has been out for a while but it’s the guys behind the stick who make it work and work it they do.

In this awesome clip, you’ll see the Raptor perform a couple steep climbs, some tight turns and then finally, towards the end, something that bobsurgranny called a “backward freefall drop move.”

Since no aerobatic name exists for it yet, we’ll go with that.

Now do us a favor and enjoy it for what this is. We get tons of comments about this “killing you in combat” and being useless in real life applications, but if you take a look, this is an airshow, not combat.

It’s just an F-22 Raptor, a large crowd and an incredibly lucky pilot who can call this his fulltime job doing his thing. Also, just try to imagine how it’d feel to be in that cockpit when you’re nose up, lose all your speed and start sliding backward like that.