Slow Motion View of ‘Sabot’ Round Being Fired 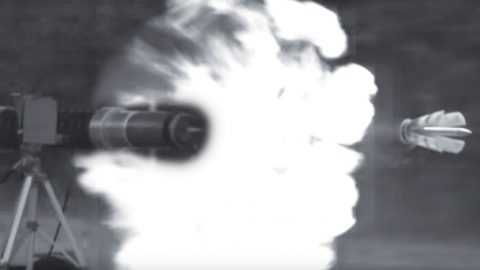 Everything Looks Better In Slow Motion.

We just found a series of videos that were all recorded by a camera capable of recording at 1,000,000 million frames per second. Yup, you read that right. That’s one million. To put it into perspective, the camera on your phone and any other camera for the most part records anywhere between 24 and 26 frames per second.

The series of videos includes everything from planes landing to bullets to rockets. We have a lot of slow motion content lined up for you guys, so we hope you enjoy it all. If you’re going to film something like a bullet however, you do need some pretty serious equipment.

This footage comes to us from a company that deals with ballistics, so equipment is all they have. The camera is probably worth hundreds of thousands of dollars, but for good reason. Those are the most sophisticated cameras out there. For this segment, they tracked a sabot round.

For those of you who don’t know what that is, we’ll give you a quick scoop. It’s a kinetic energy projectile that is meant to pierce armor.

Used against tanks or any other armored vehicle, these things liquify their occupants. There have no explosives and just use sheer speed to melt the object they are penetrating, sending shards into the vehicle. After that, there’s not much left.