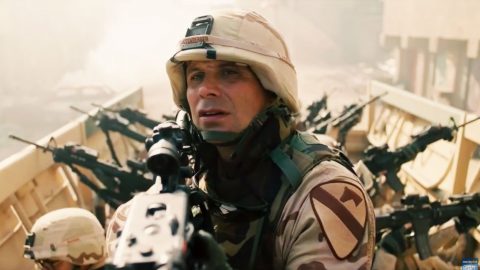 The reason we specifically mentioned that National Geographic is making this movie is that it might make you believe this film might actually be good. By getting rid of Hollywood’s big explosive CGI green screen sponsored plugged scenes, you can rest assured the movie will focus on the story and not blind you by flashy special effects. Although as you’ll see in the trailer, their production value is huge.

Many of the soldiers who were there during that firefight are actually consulting on the show.

The story revolves around the soldiers who were ambushed on April 4th, 2004 in Baghdad. This date later became known as Black Sunday; a 48 hour period of fighting and uncertainty for the 5th Cavalry Regiment and the families they left at home.

Check out the trailer below for the trailer and a behind the scenes look at what this mini-series is all about. It looks like it’s going to be a very eye-opening show.