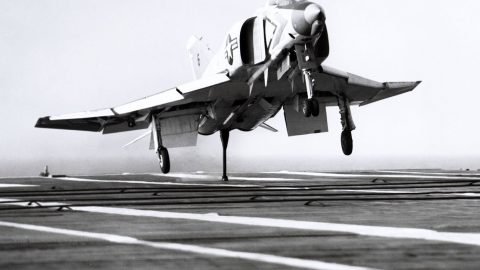 I’ve Never Seen THAT Happen Before.

This footage, although grainy, is pretty cool. If you pay attention you’ll be able to spot what we’re talking about, as we’ve never seen something like that before.

What you’ll be seeing here is an F-4 Phantom II landing on a carrier deck. Not in a way that you’ve seen before however. This guy hit the deck hard.

Apologies for the grainy video again, but those were cameras that were installed in the 60s so we’ll have to make do.

Although we couldn’t gather any solid information on this incident, we did read a couple of comments on the Youtube video itself and one guy claimed he was there. We know, don’t trust anything on the internet, but this guy seemed to know what he’s talking about and it made sense.

His account is that they were braving some rough seas that day. When the aviator came in for the landing, the deck pitched up and gave the landing gear quite a beating. The force was so great apparently, that the wing couldn’t take the pressure and broke up, making the F-4 come to a screeching halt.