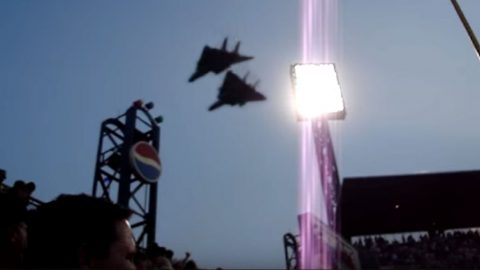 This awesome flyby took place at the Homerun derby in Pittsburg back in 2006. The jets picked to kick off the games were not one but two F-14 Tomcats and as you can imagine, the crowd went wild.

The flyover was pretty nice too. The Tomcat pilots were nice and close together, blew over the stadium and finally made a nice right back in unison. The only thing that made this better would be to witness this in person.

We’ve got to admit though. We really miss seeing this birds up in the air. Talking to some old time mechanics we do realize that they were a bit of a nightmare to maintain, but man, those swept wings were so sick.

Anyway, equipment changes as times change so we’ve got to deal with it. It would be nice to at least be able to see them at an airshow though. We can only dream.