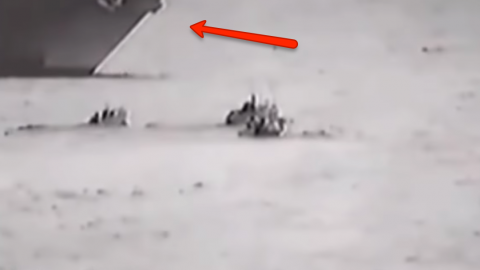 On March 18th, 2006, USS Cape St. George, a Ticonderoga-class cruiser, was cruising off the coast of East Africa. On that fateful day, the crew was faced with they weren’t expecting; a pirate attack.

In the middle of the night, a group of pirates with a half a dozen skiffs saw a large ship in the Indian Ocean and decided to take it over. When they got close, they opened fire and got the attention of the crew.

“It’s also quite possible that they don’t have a full understanding of the targets they are attacking. Perhaps they just see a big ship they think is a worth a lot of money,”-Roger Middleton | Piracy Expert

In this video, you’ll see the whole ordeal. USS Cape St. George fired a couple of warning shots at the small boats but they kept on forging straight at them. One of the crewmembers then saw what looked like an RPG so the crew did the only thing they could.

At the end of this short battle, one pirate was killed, 5 injured and overall 12 captured after the crew fished them out of the ocean. All the skiffs were sunk and the pirates’ mother ship was captured as well.

The lesson here is: Don’t attack a U.S. Navy ship with wooden boats.