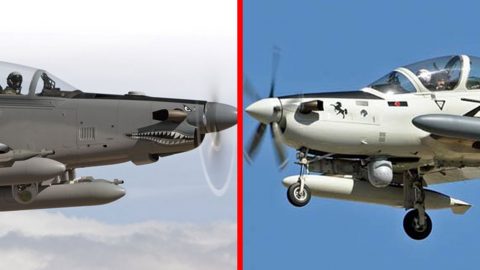 Show Me The Light.

The US Air Force’s Light Fighter Experiment is entering its final phases as the final contestants are narrowed down to the Embraer A-29 Super Tucano and the Textron AT-6 Wolverine. Recently the Air Force announced that the two light fighters would leave the test range and complete the final phases in an actual war zone. They were being pretty tight-lipped about which war zone they were being dispatched to, but now they have made a revelation.

The new light fighters are going to be sent into live combat zones in Iraq and Afghanistan to determine the winner. The Middle East makes perfect sense for a final testing ground because the areas have the relatively uncontested airspace necessary and plenty of hostile ground targets that these fighters were intended to attack.

The idea of the light fighter experiment is to find a new cost-effective aircraft that would reduce the workload from much more expensive fighter jets. The A-10 Warthog is the uncontested champion of close air support missions but it racks up around $18,000 per flight hour in maintenance costs and it not expected to return to the productions lines anytime soon.

Now that it is down to two light fighters who are you rooting for?