U.S. Soldiers Warn Afghanis Not To Take Down Taliban Flag Because It Might Be Booby Trapped 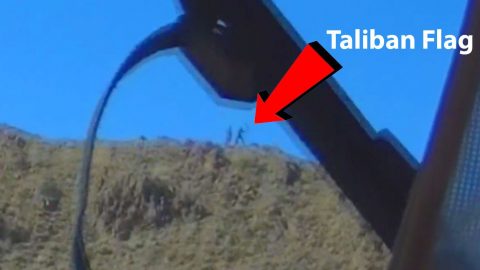 This footage is from a couple of years ago, but it just surfaced on LiveLeak. According to the description, the uploader got this footage from one of his buddies who was in the service and he just gave it to him.

Here’s some not so good order following.

According to the soldier who took the video, they were traveling near a mountainside with the ANA (Afghan National Army) in tow when they saw a Taliban flag on the mountaintop. Some of the Afghani dudes wanted to take it down but they were told not too by the U.S. guys aying it was not only a waste of time but tactically speaking, probably booby-trapped.

As you’ll see in the video,  they “carefully” inspected the flag once they reached it, and proceeded to pull it out. The rest is history.

The uploader also mentioned that because of this, they were stuck there for hours and even needed to pick up the pieces of the dead themselves. The Afghani dudes were too afraid to go back up there.