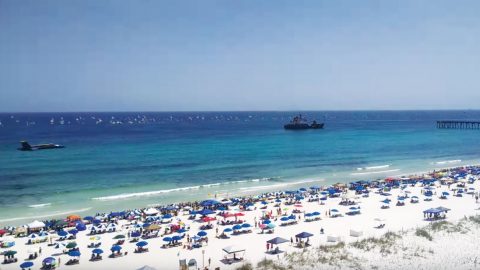 Let’s start off with the fact that the Blue Angels are absolutely spectacular. From their appearance to their routine, they’re probably one of the most watched aerobatic teams in the United States. Flying about 70 shows in 34 different places around the States, they’re viewed by approximately 11 million people a year. Those numbers are really not surprising if you’ve ever gone to one of their shows.

Although they fly in many cities, there are a few that stand out. One of them is their home base in Pensacola, Florida. Able to watch the Blues from white sands while they fly over turquoise waters, this is one of the most picturesque shows you can see around the country. This is where this video comes in.

As you’ll see, someone rented a hotel room overlooking the beach at Pensacola last year. Overlooking the beautiful beach we described above, these folks were able to watch the Blue Angel’s show right from their window.

Although the entire show is spectacular, what he managed to capture was the sneak pass that’s always performed at these shows. Flying close to the water at almost Mach 1, this is one of the sweetest passes we’ve ever seen recorded. Check it out and judge for yourself.