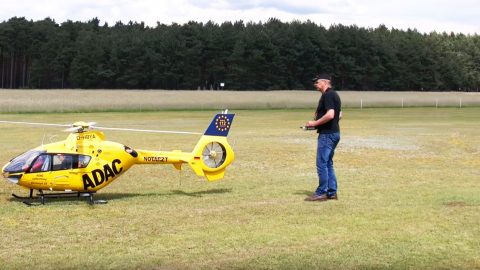 Once Again, Germans Take The Cake.

The reason we said what we did above is because once in a while we check into the world of RCs. We follow a couple of the most popular RC channels on Youtube and we’ve seen some pretty impressive work. From World War 2 era planes to concept military planes, we try to show you the biggest, fastest and most well crafted aircraft we find. Surprisingly, most of them come out of Germany and Austria.

It’s true. Out of everything we’ve shown you, b This video is no different.

Filmed in Germany during their Modellflugtreffen air meet in 2016, a man by the name of Michael Franke flew one impressive model. His 110 pound EC-135.

The Jakodofsky turbine used in this chopper cost approximately $7,000 USD.

This helicopter is modeled after a German chopper built by Airbus Helicopters (formerly Eurocopter.) It is a twin engine civilian transport plane which was introduced in 1996. It is widely used by the police however.

The best part of this that there is no kit for it. This guy built this thing all on his own with no plans. We’re not sure how long it took him, but we’re guessing it took a serious amount of time.