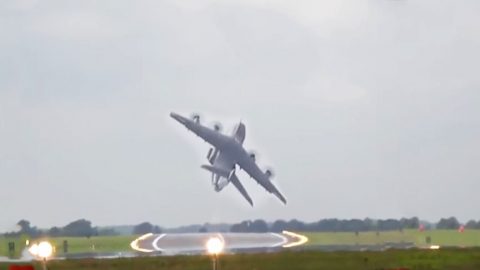 For some reason, people tend to hate on this plane. We’ve done a couple of videos showing off the incredible agility of the A400, yet, people are saying that the C-130 is better and that Airbus is a garbage company. Everyone is entitled to their opinion of course, but we just don’t get it. This plane is pretty cool and can do some amazing things.

A400’s offical name is Atlas, but the prototype was called Grizzly 2 which is a name some people still use.

Now that we got that out of the way, let us fill you in on what you’re about to see. Again, bobsurgranny, a Youtube channel that provides us with some killer videos, has put together a nice video for you to enjoy. This time it’s the A400 taking off, just not in a way you’re typically used to seeing.

Powered by four Europrop TP400 engines that are rated at 11,000 shp, this plane can take off pretty aggressively if the need arises. Keep this in mind though. In terms of size, this plane is bigger than the C-130 and right under a C-17.