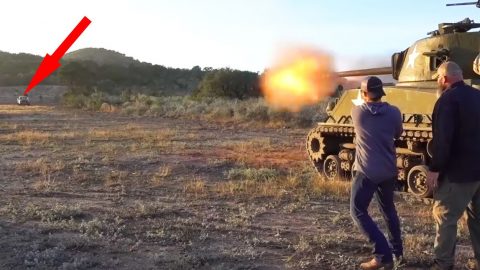 Talk About An Awesome Job.

We know, we know. Some people will be angry that such a beautiful pickup like that got absolutely demolished, but as the guy says in the video, it was time to let her go. What better way to bid her farewell than by shooting her with a cannon and then flattening her with the weight of a tank?

DemolitionRanch is a Youtube channel that has almost 3 million subscribers. What this means is that they get paid to do what they love; demolishing things. As far as jobs go we’ve had a lot of different ones, and we figure that this might be one of the best jobs ever. Just our opinion.

The tank in this video is a Centrurion, which was built after World War II by Britain and still serves today.

Now, this video is over 16 minutes long so unless you’ve got time, we encourage you to skip around. The video is pretty good though, as the guys explain what and why they’re doing this.

For the fun stuff, however, check out these times. The pickup gets shot up at 5:00 and 6:25. It gets run over at 9:35. Sticking around and checking out the damage is pretty cool too, as you’ll see what these rounds can really do.

Do watch the ending though. These guys called the insurance company as a joke and the response they got from the agent is pretty funny.