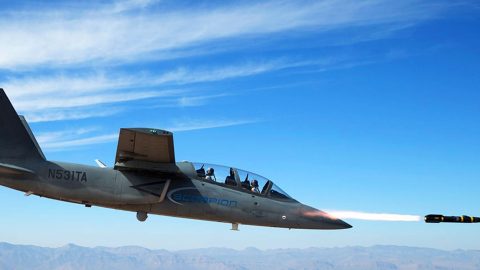 This project was kept secret from both the public and the government throughout most of the building process. Back in 2011 a company called AirLand Enterprises, a defense and aerospace contractor, pitched an idea to Textron to build the “world’s most affordable tactical jet.” Both made a private joint venture called Textron Airland and had the Scorpion flying just two years later at the end of 2013.

This plane is by no means meant to be on the front lines and try to compete with top of the line aircraft like the F-22 and F-35. It is designed to take over low-threat missions and reconnaissance, which in the long run would save the DoD billions of dollars.

“We could not be more pleased with the results of this exercise, thanks to the collaboration between our Scorpion team, the NAVSEA organization and the Holloman Air Force Base.”-Tom Hammoor, Senior VP of Defense at Textron

Not only can these planes be produced at a fraction of the cost of modern fighters, their cost per flight hour is $3,000, while the F-22s and F-35s cost nearly $70,000 per flight hour.

As the company is looking around as to who to sell it to and who is actually interested, they’re perfecting it. The latest development came in October when it launched Hellfire and APKWS rockets, hitting their marks.

Check out the video below for a short, yet very informative explanation of what this platform is designed to do. It’s amazing what and how fast you can accomplish something (F-35, wink wink.)