Heli Pilot So Low He Nearly Wiped Out A Grunt 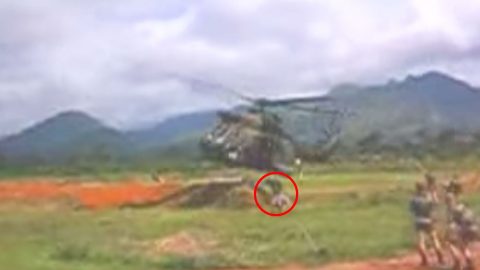 Let’s Not Do That Again.

This is one of those videos you accidently stumble across when it’s randomly suggested to you on the right side of Youtube. In our case, we’ve seen the thumbnail a few times and never clicked it. The video looked super grainy and we didn’t believe that the helicopter was that low. We are, however, glad we did because it is in fact worth sharing.

Sure, the quality sucks but get over it. We live in a world of 4K videos where things look more real in real life, but we do have to appreciate some old school videos. This one, for example, is from Vietnam (well, we’re not sure but it sure looks like it) and it offers a pretty spectacular flyby.

Other than the fact that the flyby was super fast and low and that it nearly took out a guy on the ground, we deduced that this is a French helicopter. Upon doing some further research, here’s what we found. Judging by a lot of physical attributes, it seems that this is an Aérospatiale SA 330 Puma. Built by the French in 1965 and introduced in 1968, it is a medium sized transport/utility helicopter. It can fit up to 16 passengers and lift up to 7,795 pounds of cargo.

According to this video, its pilots were badasses and liked to scare grunts on the ground. They didn’t seem to mind though.