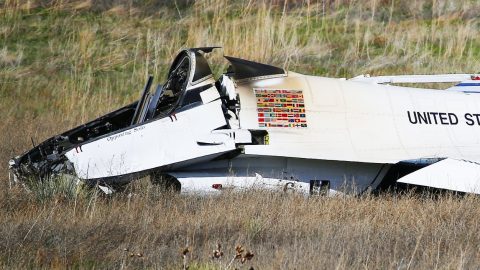 Always Blame Someone Else.

As a background to this story for those of you who don’t know what happened, on June 2nd, 2016, Opposing Solo Thunderbird #6, Maj. Alex Turner ejected out of his plane during an air show. This happened during a graduation celebration near Colorado Springs. The only things that were known back then were that the pilot broke formation which was over a populated area and flew over to a field where he safely crashed the plane.

Now however, the Air Force concluded their investigation as to what happened.

Long story short, it was a sticky trigger button. During landing, Turner cycled his throttle down in order to reduce speed, but accidentally turned off his engine. Three times.

The trigger on his throttle level got stuck which allowed it to be moved to the “engine cut-off” position. Without the trigger pressed, a pilot wouldn’t be able to do that.

Since Turner managed to eject into a field at very low altitude, the F-16 glided toward the ground rather gently. Although it was totaled, the cockpit was still intact, damaged only by the force and heat of the ejection.

The investigators went over the landing procedure multiple times and were able to recreate the problem. The trigger got stuck again.

They pulled the trigger apart and looked it over under a microscope finding many wear and tear issues.

Major Alex Turner was cleared of any wrongdoing and is cleared to go back into the air.