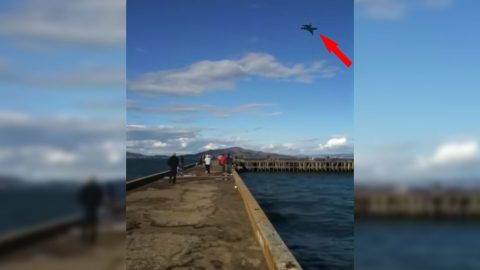 Just Minding Your Own Business When…

We’re not allowed to use curse words because of rules or whatever, but “holy $#*!” is the only way to describe this flyby. And yes, the little symbol trick helps us get around that rule.

We’re going to have to quickly apologize for the styling of this video, as it was taken vertically. That’s ok though, because it was 2011 and people were still trying to figure these things out (we didn’t film this by the way.) We all now know that you should take all your videos horizontally. Riiiiight?

Watch the whole video and don’t skip around. That’s the best way to get surprised because you won’t know when it’s coming.

Anyway, this guy we found on Youtube uploaded a pretty sweet video. While taking a stroll toward the harbor in San Francisco, he caught the Blue Angels practicing for their weekend show. He started filming the formation loop but forgot about one crucial part of the show. The sneak pass.

We’re not going to give away when it happens, but we did kind of take the fun out of it for you. When we saw the video, we didn’t know what he meant by writing “scary” in the title. We watched it anyway and it seemed boring and then “bam”, the solo whizzed by without warning.

Again, make sure you watch the whole video to get the best effect. Enjoy!