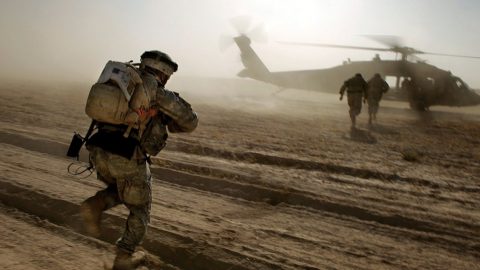 This truly gripping show comes to us from the Discovery Channel. The first episode aired on September 13th of 2016, and as of this writing there are four full episodes you an watch. The best part of this is that you can watch them for free without a subscription. We’ll provide a link to that page on the bottom of this post.

If you watched the acclaimed documentary Restrepo, this show takes place in the same region of Afghanistan. If you haven’t seen that movie, we recommend you do so STAT.

Called Taking Fire, This show follows the personal experiences of soldiers from the 101st Airborne Division. Spending a year in the deadly Korangal Valley which is the farthest outpost in Afghanistan and basically surrounded by the Taliban, these soldiers were equipped with helmet and handheld cameras.

Over the year, they captured many firefights that when seen by a producer, gave her no question to make a series about it. These soldiers are real and they’re taking real live fire. There’s really no other shows out there like it.

Supplemented by interviews from soldiers who made it out alive, this is one gripping tale. Like the all time best war show Band of Brothers, these guys are just that of today but it was also filmed live.

Right below this is a trailer for the show. Take a look at it first and see if you like the way it’s produced. If you like it, click here to watch the episodes. We highly recommend it.