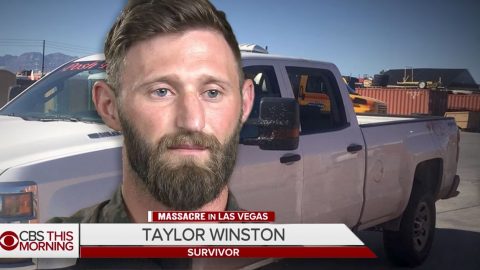 As the saying goes, “there’s no such thing as an ex-Marine. Once a Marine, always a Marine.” This anecdote couldn’t be more true when hearing the story of 29-year-old Taylor Winston, a Marine veteran who served two tours in Iraq. He was at the Las Vegas concert when the shooting began and that motto shined through.

As all of you are now aware of, the worst mass shooting in U.S. history occurred at a country concert in Las Vegas on Sunday night, October 1st, 2017. A gunman opened automatic rifle fire from a high vantage point toward some 22,000 people. The scene was gruesome, but there was a beacon of hope in all the chaos.

Marine veteran Taylor Winston did not hesitate to take action to save dozens of lives during the Las Vegas shooting. https://t.co/KWOWejlDGd pic.twitter.com/5nsBxFt65t

Taylor was attending the concert when all hell broke loose. Initially helping people over a fence that was blocking them in, he saw vendor trucks parked and decided to try his luck with getting one of them going.

The first pickup had the keys right in it so he started loading as many casualties into it as he could. Once full, he dropped them off at a local hospital and turned around and went back to the scene to get more people out.

In an interview with CBS, Taylor stated that he isn’t a hero and that many other people were also helping the injured. That might be so, but in our book Taylor, you’re a hero nonetheless.

Watch the video below to hear in his own words what happened.