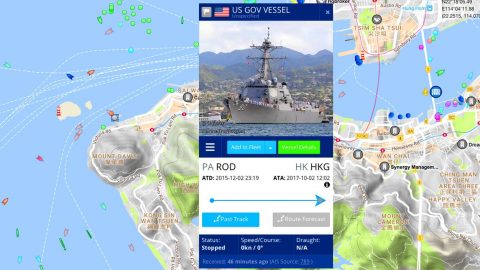 The United States Navy has a had a rough couple of months and things are going through some changes. Things looked bad after the USS Fitzgerald collided with a massive cargo ship and things got worse when the USS McCain John S. McCain crashed into a ship only a short time later. As a result of these accidents several sailors lost their lives, leaders were fired and now US Naval vessels are required to broadcast their locations, but it might not be a good thing.

Newly activated beacons onboard vessels are there to ensure safety and that incoming ships will distance themselves. However, the technology has become remarkably easy to find and even Twitter users have begun tracking the movements of US Navy ships.

This new system is a double-edged sword. On one hand, it will reduce the risk of collisions by making nearby vessels of their presence. However, this puts these ships at risk for the possibility of enemy attacks.

We can all agree that changes needed to happen after the two incidents that took the lives of innocent sailors and caused millions of dollars worth of damage. But is it worth the risk of being tracked with such ease and the dangers that come with it? Where do you stand on the issue of the new tracking beacons? See the tracking system for yourself in this link.