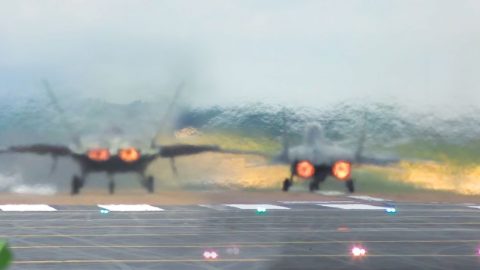 When we found this video, it initially sounded a bit silly to us. There’s really no comparing the F-22 Raptor to a MiG-29, as they’re from completely different eras.

Then when we thought about it, we remembered that in the 1980s the Advanced Tactical Fighter program was meant to develop a superior aircraft to counter the Su-27 Flanker and MiG-29 Fulcrum which you’ll see in this video. That program was the genesis of what we now know to be our 5th generation fighter, the F-22 Raptor.

Although technologically more advanced in terms of avionics and stealth design than the Soviet plane, MiGs are known to be extremely maneuverable. Their initial versions didn’t have thrust vectoring nozzles like the Raptor, 29s more modern variant, the MiG-35, does. The suckers can certainly do a lot more.

With an airfoil designed to take Gs and be the best air superiority fighter it can be, MiG-29s are immensely impressive considering they were introduced in the 80s.

We are quite biased however, as we are a U.S. based company. That aside however, we have to admit that the Raptor is one sexy fighter and when it comes to this video, it can definitely pull off a steeper, more spectacular takeoff.

Take a look and judge for yourself. If you care to give an opinion, feel free to comment on our page.