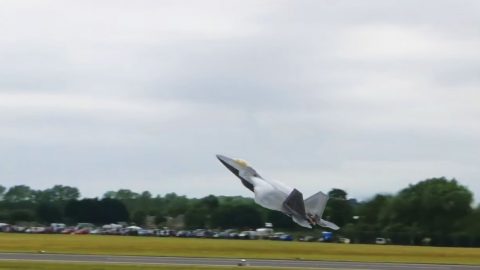 That word gets thrown around a lot. “Awesome.” Nowadays even the most minute things are called that, and to many’s dismay, it’s the most used word in the vocabularies of 20 somethings. Now that we get our rant out, let’s talk about what we really mean here.

The ability of the F-22 Raptor to takeoff in such a manner is absolutely awesome. Not only does it look spectacular, everything that takes place in the background is astonishing too.

Beginning with the engineering and technology itself, the vector thrusting engines which give it up to 35,000 pounds of thrust each give it a thrust to weight ratio of about 1.08. It’s no wonder that this fighter can make such extreme changes in orientation on a milliseconds notice.

Then there’s the pilot. Although this maneuver requires him/her to take a lot of Gs, the F-22 is capable of much more than that. In its development stages it was discovered that it was capable of pulling such maneuvers that pilots couldn’t handle them as their bodies simply couldn’t take it. We’re not even talking about G-loc. We’re talking permanent injury or death.

This is why this plane is awesome. Now, go enjoy this awesome video.