This Round Flies At 3,500 MPH–Literally Liquefies Terrorists 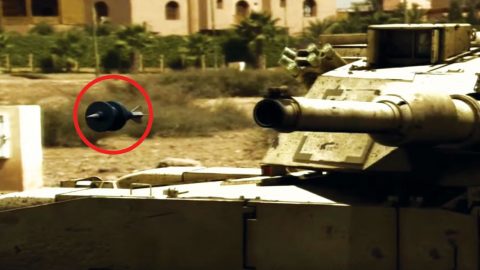 At Least The End Is Quick.

This footage comes to us from the American Heroes Channel. It’s a quick three minute snippet featuring a new kind of threat that U.S. soldiers had to deal with and the technology that was used to stop it.

When the first soldiers and equipment were laid down on Iraqi soil, the opposing militia did not have the tactics nor the equipment and technology to battle heavily armored vehicles such as tanks. That’s when we saw the most prominent use of suicide bomber cars and later IEDs.

“It liquifies everything inside…you can technically come in with a hose and hose out the enemy tank crew…It annihilates human matter.”

As the soldiers who were actually there will tell you in this clip, they had to make split second decisions when it came to identifying potential threats. When the decision was made, the weapon of choice was the Sabot Round.

Watch this clip to get a neat perspective on the absolute carnage it creates.