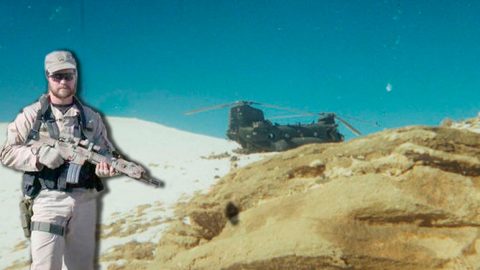 The year was 2002. The place; Afghanistan. At the time, U.S forces were conducting Operation Anaconda which was comprised of a bloody two-week fight at the Battle of Roberts Ridge.

During that time, an MH-47 Chinook was transporting SEAL Team 6 and Air Force Technical Sgt. John Chapman to their insertion point high in the mountains. Their task was to overlook troops below who were fighting over 1,000 al Qaida members and directing air support to help them.

They never made it to that point.

Their Chinook was hit with an RPG and crash landed a few miles away. The al Qaida fighters soon caught up to them and a fierce firefight ensued during which Chapman was hit. This is the point that the Air Force and Navy disagree on.

After Chapman went down, one of the SEAL team members, senior chief petty officer Britt Slabinski, was able to get to him but said he found no pulse. Stuck between a rock and a hard place, the SEAL team had to retreat, leaving Chapman behind.

The Air Force, however, claims that Chapman wasn’t dead but unconscious. They pulled up and enhanced a Predator drone’s footage of the fight and showed him getting back up as he was being surrounded by al Qaida. He was seen going into a bunker and killing one fighter with his gun and then another one on one using his bare hands. Right before that, however, is what really earned him the citation:

Shortly after insertion, the team made contact with the enemy. Sergeant Chapman engaged and killed two enemy personnel. He continued to advance reaching the enemy position then engaged a second enemy position, a dug-in machine gun nest. At this time the rescue team came under effective enemy fire from three directions.

From close range he exchanged fire with the enemy from minimum personal cover until he succumbed to multiple wounds. His engagement and destruction of the first enemy position and advancement on the second position enabled his team to move to cover and break enemy contact.

But now Navy SEALs are stepping up with their own opinions on the matter, and let us warn you, they’re not all that popular.

Confronted with the fact they might have left a wounded man behind, the tactic of trying to say he was dead when they went back for him discredits all the other heroic deeds Chapman might have done, thus disqualifying him from getting the Medal of Honor.

We’re not sure how to feel about that. Aren’t we all on the same side? This man put his own life on the line to save others, so why aren’t the SEALs able to give the spotlight to someone else for just a bit?

You can find Chapman’s final stand in the drone footage below.