News | 4 A-10 Pilots Grounded After This Low-Altitude Flyby In N.C 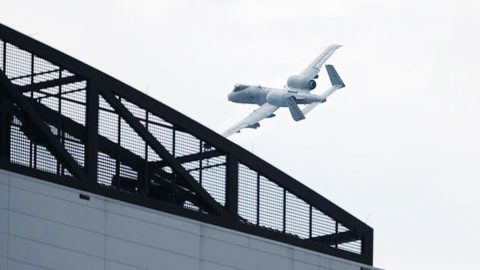 That Looked Pretty Good To Us.

On Monday, August 29th, 2016, four A-10 Thunderbolt II buzzed the Bank Of America Stadium in Charlotte, North Carolina. A bystander quickly grabbed his phone and recorded one of the jets and posted it on social media. As a result, the pilots were grounded and are now under investigation by both the FAA and the Air Force.

Although the clip is quite short, it’s still pretty great. We’re actually surprised that anyone actually caught this on video, because something like this happens pretty fast. We can thank the fact that in today’s world, everyone is glued to their phone which is probably why we at least got to see this. The four pilots were part of the 74th fighter squadron of the 23rd Wing and were flying a routine navigation training exercise. Flying from Charlotte to Moody Air Force base in Georgia, they requested to fly over the Panther’s Stadium.

Receiving an “O.K.” from ground control, the 4 Hogs flew over the stadium but were apparently too low. There were many reports of startled Uptown workers, with one saying that they were at about his office’s height on the 42nd floor which is about 300 lower than they should fly according to standards.

The head coach of the Panthers, Ron Rivera, saw the Hogs as he was on the field at the time. Like us, he said that he was surprised but in the end it was a pretty awesome thing to witness. The pilots actually banked over the stadium and waved at them, so in our book they’re pretty awesome.

As for the brass however, the investigation is still ongoing.