US Warns N.Korea In Biggest Show Of Force In History 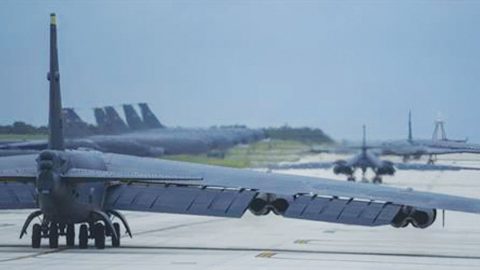 That’s A Lot Of Bombing Power.

There has been significant movement of military assets in the the Pacific as well as South Korea for quite some time now. With North Korea constantly flexing their muscles and testing missiles, both U.S. and NATO forces have been actively training with South Korea. The Air Force even sent a B-52 Stratofortess along with F-16s and F-22s at the beginning of the year for assurance, but now, we threw everything at them.

On August 10th, 2016, the U.S. Air Force sent two additional bombers to Guam. This is actually the first time in history they ever flew together so this is special for all aviation fanatics.

“(It’s a)…valuable opportunity for our bomber crews to integrate and train together, as well as with our allies and partners through the region in a variety of missions.”-Air Force secrtary

In addition to the B-52 bomber that’s already there, the base in Guam also welcomed a B-1 Lancer and a B-2 Spirit. These three bombers are very different from each other both in appearance and mission types. The Spirit is stealthy, the Lancer fast and the B-52 is there to just kill everything twice as someone once said.

The Pentagon released that the B-1s and the B-52 are in Guam as a part of CBP or “Continuous Bomber Presence” mission. The B-2 is there as part of BAAD or “bomber assurance and deterrence deployment.”

One thing’s for sure though, the leader of North Korea might be a bit on edge right now.