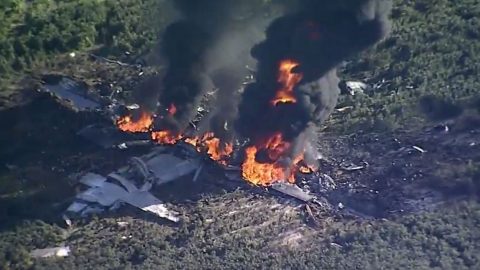 Our Thoughts Are With All Those Affected.

At 4 p.m. on Monday, July 10th, 2017, a KC-130 operated by the Marine Corp crashed in a soybean field in Mississippi. The Marine Corps stated that the plane took off from Cherry Point, North Carolina.

The KC-130 is a four-engine turboprop refueling aircraft manufactured by Lockheed. It’s a version of the widely produced and used C-130 Hercules, but modified for mid-air refueling duties. The Marine Corps operates 48 of them.

Local farmers reported hearing a loud boom first and then saw a plane falling out of the sky. Some said that they saw the engine on fire before the crash as well.

“You looked up and you saw the plane twirling around. It was spinning down,” said Mississippi resident Andy Jones. Others saw the same behavior of the plane before the crash.

The names of the crew have not yet been released by the Marine Corp as the family members are still being notified. The crash is under investigation.