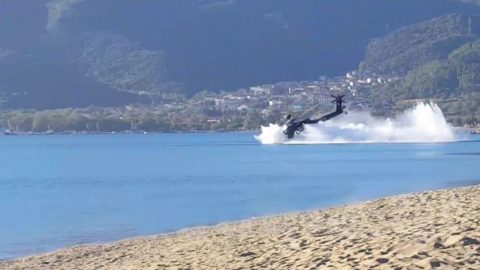 It All Happened So Fast.

On September 20th, 2016, Greek forces were taking part in SARISA exercises. A Greek training drill, its aim is to coordinate the efforts of their three branches of armed forces as well as U.S. Special Forces. Until now they went without a hitch.

During this part of the exercise, at least two AH-64D Longbow Apaches were flying over the coastline near the town of Chalkidiki, Greece. There were some civilians watching the ordeal as could be expected, one of them choosing to shoot some video with a phone. That’s when all hell broke loose.

We’ll let you watch the video and judge for yourself, but we’re guessing this was the pilot’s mistake. We’ve sifted through dozens of news articles both from the U.S. and Greece and read that it was either engine trouble or some other malfunction. To us it seems like he pulled out of a dive too late.

The story does have a happy ending however. Although the heli was obviously lost, both pilots were pulled out and didn’t suffer any injuries. They were sent to a local hospital just as a precaution.