Submarine Torpedo Cuts Destroyer In Half 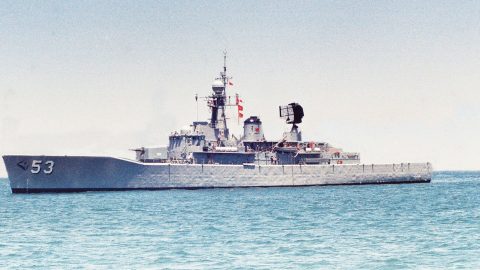 No One Was Hurt During This Exercise.

Ahh, sea trials. The time when a ship, or in this case a submarine, gets to stretch its legs and see what it’s capable of. A lot of times however, this is bad news for older ships such as the one in this video.

What you’ll be seeing here is HMAS Torrens (DE 53), a destroyer escort for the Royal Australian Navy. She was commissioned in 1971 and served in many conflicts including the Vietnam War. Her fate was sealed in 1999 however, when she was targeted by a new breed of submarines.

HMAS Farncomb (SSG 74) is one of six Collins class submarines which were all constructed in Australia for the first time. An attack sub, it had to test out its tubes to make sure everything was in working order. For that practice exercise, the above ship was selected and was chosen to receive a Gould Mark 48 Mod 4 torpedo.

This video will show you exactly what that torpedo can do. 19 ft. long and weighing over 3,500 lbs., this thing can inflict massive damage, including breaking a ship’s keel as you’ll see here. The damage of such a direct hit is almost unfathomable.

As a fun fact, this video, although heavily edited with CGI, was used in Michael Bay’s movie Pearl Harbor.