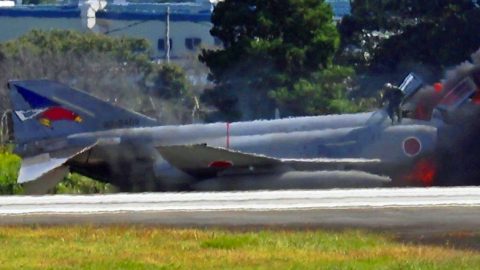 The F-4 Phantom was retired from the United States Air Force in 1996 but there are still a few of them hanging around. The Japanese Air Self-Defense Force among the few remaining air divisions that still uses the F-4 Phantom. It was tragic to hear that one of those F-4 Phantoms met its fate after suffering a crash.

Recently at Hyakuri Air Base, an F-4 Phantom of the 301st Tactical Fighter Squadron of the 7th Air Wing caught fire while taxing before a training exercise.

“The aircraft was taxing at the time of the accident. Press reports suggest the aircraft will be written off as a total loss. The accident happened at 11:45 AM local time in Japan on Oct. 17, 2017.”

Fortunately, the pilots were able to escape the flaming Phantoms without suffering any injuries but the loss of such an iconic jet is still painful. Fire crews arrived shortly after to extinguish the inferno and an investigation is underway to determine the cause of the accident.

Our hearts go out to the well being of the pilots caught up in the accident. The film of the incident can be seen in this clip.