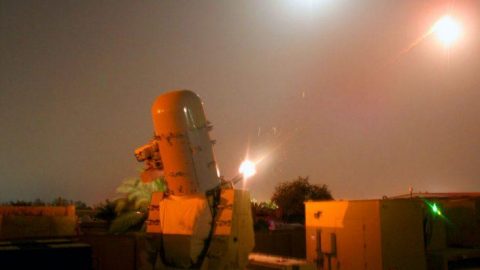 We like to think of our military as invincible, but often that’s not the case. From time to time attacks penetrate our defenses and lives are lost so we turn to new defense technology. The Northrop Grumman Counter-Rocket, Artillery, and Mortar (C-RAM) is the latest innovation for defending troops from aerial attacks. The C-RAM can actually be adapted to current artillery as a means of anti-air attack. It acts as a warning system to quickly fire upon mortars, missiles or enemy warplanes. This technology could drastically improve conditions for soldiers stationed in enemy territory.

“C-RAM uses sensor, command and control, and visualization tools to detect incoming threats and locate their sources. Once C-RAM confirms the threat, its command and control (C2) system warns exposed soldiers, and provides track data to the intercept system to destroy the incoming RAM threat, and passes point of origin and point of impact information on to other systems and sensors.”

The advanced air defense system is being developed by the Army Contracting Command is expected to be finished by 2019. In the following video, we can see a fully operational C-RAM testing out its weapons with the United States Military.