This Beastly Reverend Broke An Impossible Record With This C-17 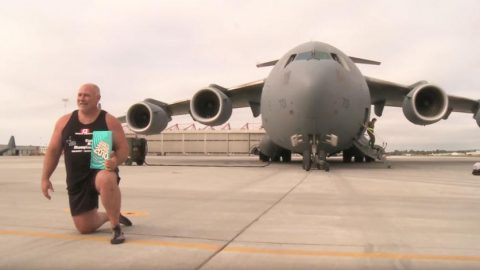 Some Power Is Definitely With Him Alright.

Ok, so this isn’t exactly news, but it was news to us when we saw it. This dude, 51 by the way, pulled a C-17 Globemaster III with his own damn self. Sure, it wasn’t that far, just over 26 feet, but this beast of a plane was also completely still when he started. This record has not been broken still.

Kevin Fast, a 51 year who has been a pastor at a Canadian church for almost 30 years, is no stranger to pulling things. At this point, he has broken 19 powerlifting records, 9 of which still hold today. He has pulled things from a fire truck to a house, (yes, a house), but beat his personal record in the year 2010. In order to raise money for a fundraiser, he decided to try to pull a C-17 Globemaster III. In order to beat the world record, he had to pull it at least 16 feet, but he managed to do 26. He said that for the first minute or so, this 375,000-pound plane did not budge but he didn’t give up. With some motivating words from his son who was right next to him, he managed to get it rolling.

At the end of the day, Reverend Fast walked away with another world record and a charity got $65,000 due to his efforts. Now that’s God’s work.