Strong Gust Blows Airplane Clear Away From The Gate 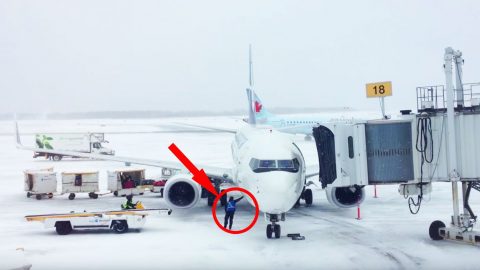 Let’s Just Say There Was A Slight Delay That Day.

You’d think we made this up, but there is actually video proof of this actually happening. Posted back in 2014, flights were delayed 4 hours due to a storm. With today’s technology however, that’s not such a bad thing. People just whipped out their phones and started doing what they always do on them. Nothing.

One guy did notice that the wind was picking up and started recording and just the right moment may we add. Although the video is 11 minutes long (don’t recommend watching the whole thing of course) the first 2 are where the “action” happens.

This incident happened back in 2014 at the Helifax Airport in Nova Scotia.

Recording the Boeing 737 he was supposed to get on, the guy captured it literally getting blown away from the gate. Withing seconds, it was probably some 10 feet away.

What’s more, one of the ground crew tried to stop it from happening by bracing against  it. We’re not sure if you’d agree, but we think that it actually helped a little bit.