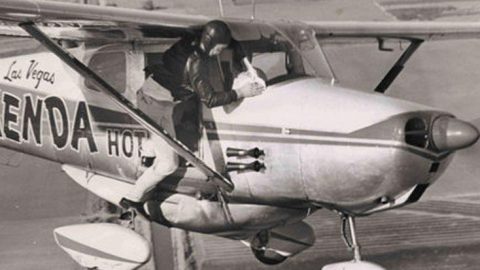 We all love flight, it’s the reason you’re on this website reading this right now but even the most passionate aviation fanatics have their limits. There are some lengthy flights out there lasting hours on end soaring halfway around the world where you just wish you could stretch your legs. But those are nothing compared to the world record for the longest continuous flight which lasted a whopping 64 days.

It sounds crazy that anyone would stay in flight for well over two months but there was a pair of pilots crazy enough to do it. The story begins in Las Vegas in 1959 with the opening of the Hacienda Hotel. The owners expected the grand opening to be a big hit but it soon became apparent that the Hacienda’s distance from the Las Vegas strip was having an impact on attendance. Desperate for patrons at the resort the owner thought up an advertising plan, the longest continuous flight in history. The record to beat was 50 days of continuous flight, but they were determined to break the record with the Hacienda Hotel’s name plastered all over the plane. A Cessna 172 was purchased for the flight with Bob Timm and Cook as its pilots. The interior of the plane was modified fit a sink and a mattress where pilots would take four-hour rest while the other was piloting. They would fly alongside a car which would refuel the plane and bring them meals so they could have the essentials to stay airborne.

This was a very grueling flight that really took its toll on the pilots. Exhaustion, isolation, the noise bellowing from the engine and more than once they nearly crashed after falling asleep at the wheel. But they pressed on despite the mental and physical challenges they pressed on, by breaking the record and surpassing it by two weeks.

The record has lastest for nearly 60 years because no one else is crazy enough to attempt it. Check out this video for a more in-depth look at the ridiculous record for continuous flight.