The Only Footage Of Russian T-50 Testing Its Cannon 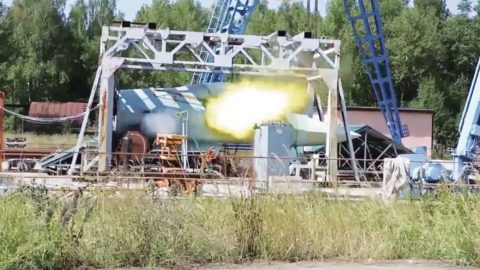 This footage comes to us straight out of Russia. A place that makes some of the most rugged aircraft platforms, this video is no different. Russia’s new 5th generation fighter, the PAK FA (also known as the T-50), tests its massive cannon in this video. We’ve never seen this before, so it was pretty refreshing to learn something about this plane and main weapon system.

We’ll give you a quick rundown of both the plane and the cannon this baby’s using. We realize that most of you are well versed in U.S. military equipment, but not so much on foreign technologies (for the most part.)

The PAK FA is Russia’s first 5th generation fighter and a response to the F-35 Lightning II. It’s a twin-engine, single seat stealthy jet fighter and unlike the F-35, is supermeneuverable. It first flew in 2010 and is now being tested, with its estimated introduction into full service falling sometime in 2018.

For CAS and air to air combat, this aircraft is equipped with a Gryazev-Shipunov GSh-301 autocannon. Designed in 1977 by the USSR (formerly Russia), this weapon is still widely used by most of their fighter aircraft. Equipped on everything from MiGs to Sukhois, this cannon is able to shoot up to 1,800 rounds per minute.

Check out this video to see it in action at the range. It’s pretty epic.