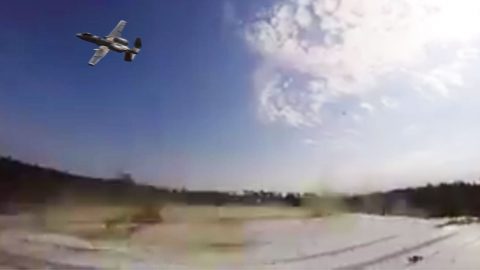 There Are No Eye Witness Accounts.

We’re sure the topic has been beaten to death over the years but especially recently, as the DoD is trying to steadily phase out the A-10 Thunderbolt II. It is by far the best CAS platform ever created and any grunt who’s been under its watchful eye will tell you they wouldn’t want to have anything else flying over them when things get messy.

We’ve seen and shown you folks countless videos of such missions where soldiers were pinned down and it was the pilot of an A-10 who was able to give them breathing room. Most of these videos were shot from afar or from the air, but we’ve never seen or heard what it’s like to be in the middle of those massive rounds.

USSOCOM (United States Special Operations Command) just released one such video. During a live fire exercise, they placed a camera right in the middle of the firing range and had the Hog go at it. The camera didn’t sustain a direct hit (otherwise, they’d be nothing to show) but you get to hear the impact of those 72 bullets that hit the ground every second the pilot has his/her finger on the trigger.

Then, after a few seconds, you get to hear the all-too-familiar “brrrrrt.”