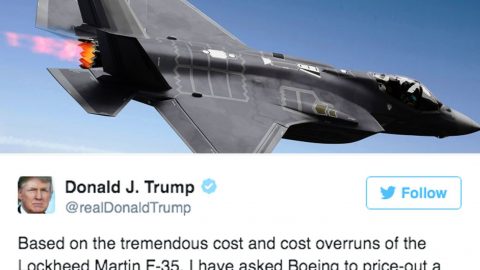 We’re a military and aviation site, we know. We don’t step into political territory that often and we don’t mean to do it now. But, Trump just stepped into our territory, so here we go.

The topic of Lockheed’s F-35 Lightning II is a convoluted one. It’s years late, over budget and still there’s no end in sight for it being fully operational. That’s what a layperson with no knowledge of aviation would see at face value.

All Trump sees in addition to that is money. We get it. We love when a president is trying to stop corruption, back door deals and save taxpayers money. It’s not as simple as making a phone call and getting a new quote though.

Based on the tremendous cost and cost overruns of the Lockheed Martin F-35, I have asked Boeing to price-out a comparable F-18 Super Hornet!

The tweet above is so ignorant it makes us pretty sad. Does he know about JSF (Joint Strike Fighter Program?) Does he know that what he’s doing now was already done in the late 90s and Boeing already lost the deal to Lockheed? Does he realize that the future of aviation is stealth, not dogfighting?

Although we love our Super Hornets, they can’t be simply retrofitted to be stealth aircraft. With stealth comes an entire new design which means building an entire new plane. Are we ready to dish out another trillion for a new project?

Don’t get us wrong. It annoys us to no end that our personal year end taxes probably cover a single button of an F-35 but hey, that’s the price we pay to stay safe. Scrapping the whole project and starting another possible disaster is no cure for a disaster.