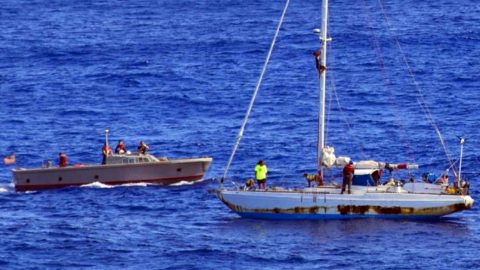 The Ocean is a big place a beautiful one but it can also be a scary place as two women and their dogs found out. What was supposed to be a beautiful voyage at sea turned out to be five months of torment stranded in the middle of the ocean. Fortunately, the United States Navy discovered them and came to their rescue.

Jennifer Appel and Tasha Fuiaba set sail with their dogs from Honolulu, Hawaii destined for Tahiti last May. The journey started off on a bad note with one them dropping her phone into the Ocean but things were about to get worse. A short time into their voyage the boat’s motor stopped worked causing a bit of inconvenience for them. Appel and Fuiaba are seasoned veterans of seafaring so they kept going by catching the winds. But then the situation became dire when the ship’s mast broke.

Stranded at sea the women radioed distress calls without an answer. Their ship suffered through three storms that nearly capsized their boat. And to make matters worse a pack of Tiger sharks attacked their boat, slapping their tails against its hull looking for a quick meal.

“It was very depressing and very hopeless, but it’s the only thing you can do, so you do what you can do.”

Months of suffering ensued but fortunately, they brought enough rations to last a year. They pressed on for months despite a seemingly hopeless situation, but then their prayers were answered when they were rescued by the USS Ashland.

These women and their dogs are lucky to be alive considering all that they have been through. They will be treated on the naval vessel but actually mentioned that they want to get back on their boat and attempt to sail to Tahiti again.

The film of their heroic rescue from the United States Navy 900 miles off the coast of Japan can be seen here.