Bullets Whizz Inches Away- Pinned Down By Accurate Enemy Fire 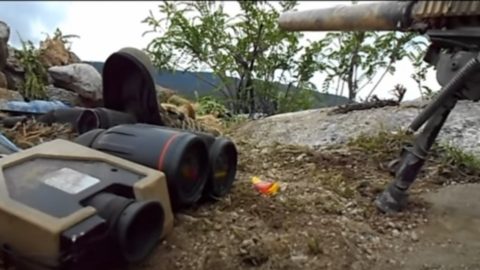 Watch this raw combat footage taken from a documentary about the war in Afghanistan. On the video, a sniper was pinned down by heavy Taliban fire.

The cameraman from the “No Slack Battalion” was also interviewed. They were a unit operated out of far-flung positions deep in Taliban-held territory. No Slack were in regular, if not constant, contact with the enemy.

When asked how did this engagement begin, the cameraman said:

“It all started when my sniper team saw 5 guys crest the ridge line 1450m away, holding PKM’s, RPK’s and AK’s. We hit one of them and they were pissed off, so 5-6 PKM and RPG teams engaged us. We had about 20 line company guys with us with built up positions and THEY were the ones to get spotted.”

When asked what type of weapons were being fired at them, he said:

See the full interview on the video’s description.