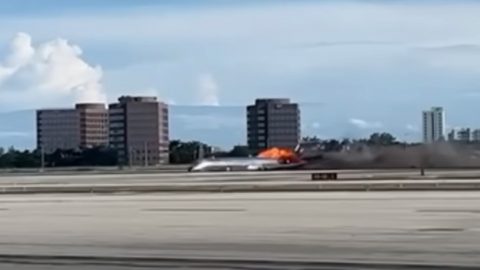 3 people were injured and taken to the hospital with minor injuries after a Red Air passenger jet crash landed at MIA airport and caught on fire. Cell phone footage taken by a spectator shows the plane skidding across the runway and then going up in flames. You can see lots of smoke and emergency crew rushing to aid as people are evacuated from the aircraft.

The jetliner was coming from the Dominican Republic when officials say that the landing gear and the nose of the plane collapsed and was to blame for the ordeal.

All 126 passengers thankfully survived and more details are coming out soon as to the exact reason why the landing gear failed in the aircraft.