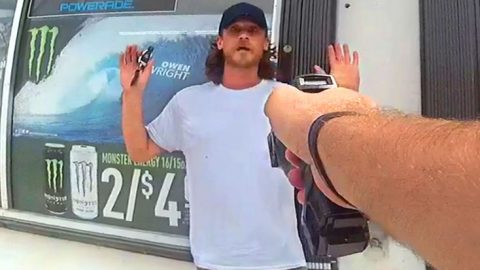 The life of a police officer can be good and it can also be bad. The boys in blue can have fairly routine days where nothing special goes on aside from keeping the peace. But then there are those days where the cops have to take on the not so good guys and that’s where the more colorful stories come from.

The Tallahassee Police Department recently began a search or a suspected rapist at large within the community. The suspect was accused of a home invasion, rape at knifepoint and theft of the victim’s vehicle.

“One of our officers spotted the suspect pumping gas into a Mercedes at the marathon 1220 Washington Ave. Not positive who he is but concerned.”

When the officers confronted the suspect outside of a gas station they gave him a chance to surrender peacefully. The officers drew their weapons on him, had him on the ground and then he decided to make a run for it. As you can see from the video, running from the police was about the dumbest thing he could do in that situation.