This Massive Storm Nearly Crippled US Navy During WWII 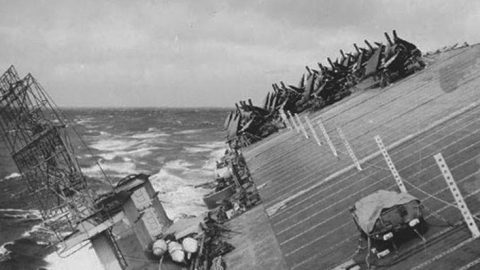 Nearly a millennium ago the Mongol Warlord Kublai Khan, grandson of Ghengis Khan sent a fleet of ships to conquer Japan. The Mongols were considered the most ferocious warriors of the time and Japan stood little chance of defeating the invading barbarians. Just when all seemed lost for Japan Typhoon came and destroyed Kublai Khan’s entire fleet, saving Japan. The Japanese named this storm the divine wind or Kamikaze as it is more formally known, though the Americans would soon experience Kamikazes of their own during WWII.

As the final years of the war approached Imperial Japan became more desperate to stop the advancing American warships and began using kamikaze suicide bombers. These strikes did a great deal of harm to the United States Navy, but they were about to experience the true kamikaze.

On December 16, 1944, a storm called Typhoon Cobra tore through the Pacific Ocean where the US Navy was currently situated. The wind speed rose to 145 mph and waves smashed into the warships as the crews battled for their lives against the elements. By the end of the storm, 3 warships were sunk, 146 airplanes were destroyed and almost 800 men lost their lives.

The United States Navy would suffer through another two major hurricanes over the course of the following year. Fortunately, Imperial Japan had surrendered the decimation of the fleet could have seriously affected the Allied Forces outcome for victory.

“If the war had not ended (when it did) this damage, especially the grounding and damage to 107 amphibious craft … would likely have seriously impacted the planned invasion of Japan.”

This archival footage shows the severity of the storms as they battered the United States Navy.