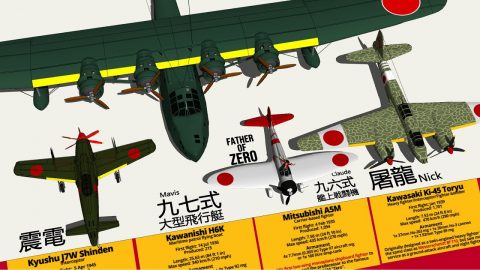 Some of Japan’s Best

AmazingViz listed out some of the craziest WWII Japanese aircraft to be ever built. Here are his top 5 picks:

Kaneyoshi Muto was the most famous pilot of the Shiden. Muto had 34 confirmed kills and is credited with approaching 12 Hellcats alone. He shot four of them down before retreating.

Japan’s fastest fighter of WWII had a max speed of 427mph. Its operational ceiling enabled it to intercept the high-flying Superfortresses.

A list about Japanese planes wouldn’t be complete without the A6M. The top ace of Japan, Tetsuzō Iwamoto, claimed 202 individual victories using the infamous Zero.